5 Fun Black Friday Facts That Will Surprise You

Ever wonder about how Black Friday got its name? 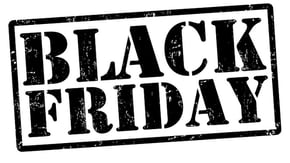 The day was dubbed "Black Friday" back in the 1960s when when accounting books were still logged in pen and ink and the day's sales helped move stores out of the "red" (losses) in into the "black" (profits).

In this post, we'll take a look at some of the fun facts about the day that has expanded to an entire weekend of shopping deals.