Do you currently manage an orchard, vineyard, or a nursery? Now is the perfect time to spray 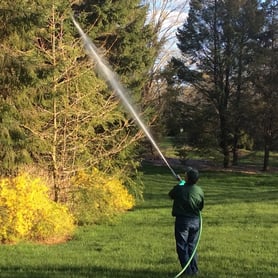 dormant oil to protect your trees from pests. Timing, spray solution and spray equipment all have an impact on the effectiveness of your application.

Don't forget to take a look at our tall tree spray guns that can output high pressures to ensure proper coverage even on the highest fruit trees. A sprayer such as the Kings Sprayers 50 Gallon 4-Wheel Sprayer, can be pulled by hand and offers great maneuverability making it easy for you to use in tight spaces. Ready to learn more?

Read the article below for tips on applying dormant oil effectively this spring.

Reprinted from University of Missouri Extension

For home fruit growers the time is here to make annual dormant oil application on selected fruit trees and small fruit species. Dormant oil is a refined petroleum product formulated for orchard tree use. It has been in use for well over a century in commercial orchards, and is still regularly used today. It is classified as an insecticide, and acts by coating over-wintering insects hiding in the tree trunk and limb bark with a suffocating layer of oil. A second type of dormant spray material is liquid lime-sulfur. It is considered a natural product, and is used mainly on small fruit (grapes, blueberries, blackberries), to sanitize stems and kill overwintering fungus.

The two most important insect species suppressed by dormant oil sprays are red mites and scale. Both are common pest problems in fruit trees. Important to remember is that oil sprays will suppress, but do not always totally control these insects. Additional sprays of insecticides will likely be necessary to control these and other insects during the growing season. However, dormant oil decreases the insect populations by killing overwintering adults and eggs, and thus slows seasonal build-ups. This makes it well worth the extra time and cost.

Dormant oil is regularly used on apple, pear, plum, quince and crabapples. It is also recommended for use on currant and gooseberry bushes. As the word "dormant" implies, this spray should be applied before the buds swell or before new growth starts in the spring. If applied after growth starts, the new tissue can be damaged. Application should be done when temperatures are above freezing (35-45F), and when the weather forecast calls for non- freezing temperatures for at least 24 hours after application. It is important to make thorough coverage when you spray, taking care to spray bark crevices and cracks where insects may be overwintering. Dormant oil can be purchased at any garden center, and is relatively inexpensive.

Peaches, nectarines, apricots and to an extent plums, do not often require an oil spray. However if mites have been a problem in the past, then a dormant oil spray is suggested. More important for peaches and nectarines is a dormant spray containing lime-sulfur, or a copper based fungicide for control of peach leaf curl disease. For plum pocket disease in plums, apply chlorothalonil (sold as Daconil). Apply these sprays at any time during the winter, but before the buds swell for the new season.

Grapes, blueberries, gooseberries and brambles (blackberries, raspberries) should be sprayed with liquid lime-sulfur to reduce anthracnose and other disease on the canes. An important note: for all fruit crops, liquid lime-sulfur should not be sprayed with, or in close timing (1 week) with an oil spray as tissue damage can result. Remember, always read and follow label directions for proper use of any pesticide.